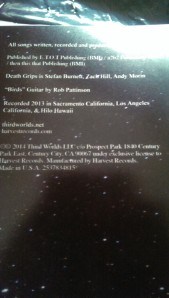 As revealed by the new Record Store Day pressing of their previously digital-only Government Plates, Twilight star Robert Pattinson has been credited with playing guitar on the Death Grips’ track ‘Birds’. His involvement isn’t as surprising as it should be, given the infamous photo of Zach Hill and Stefan Burnett infamously sulking with both Pattinson and Beyonce backstage, but it is certainly out of left field – perfectly fitting for a band that made their career out of being left-field. I’m not quite sure what to do with this information, but at least Pattinson stands to gain a little cred with this move.