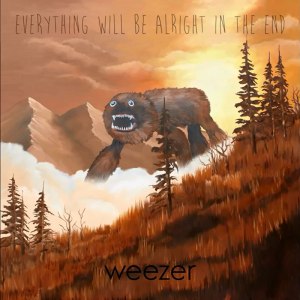 Weezer is infamous for its many musical stumbles post their “Pinkerton” era. From cringe-worthy material like “The Girl Got Hot” to Lil Wayne guest rap spots, their track record for the past decade is borderline laughable. After the rapid fire release of their last three albums (“Red,” “Raditude,” and “Hurley”) within the span of three years, Weezer found themselves at a kind of crossroads – they were hemorrhaging fans and sales, and their attempts at crossing over into the pop realm with songwriter collaborations had fallen flat.

Enter Ric Ocasek, the man behind the boards for the legendary “Blue Album.” Frontman Rivers Cuomo had a revelation of sorts, realizing that he was misguided in the direction he had been taking Weezer in, and looked to recapture the classic Weezer sound.

And recapture it Weezer has done. On Everything Will Be Alright in the End (referred to as “EWBAITE” from here), the classic power-pop crunch of the band’s glory days is back in full force, with layers of thick guitars dominating the record. Ocasek brings a focus to this album that had been seriously lacking in the band’s previous efforts, simplifying the arrangements down to only what the songs need.

From the slick, Beach Boys-esque “Go Away” (which features Best Coast singer Bethany Cosentino), the huge arena sound of “Back to the Shack,” and the guitar bombastics of “Return to Ithaka”, EWBAITE features an amalgam of the best elements of the band. There’s flashes of almost every major sound the band has experimented with, from the Green-album feel of “Lonely Girl”, the metallic crunch of Futurescope, to the downtrodden, Pinkerton-esque vocals on Cleopatra. Weezer has finally pared down their sound over the past decade into the best parts, and inserted them into the classic mold.

One of the most impressive aspects of this album, however, is the three-part “The Futurescope Trilogy” that closes out the album. Being mostly instrumental, it showcases the guitar wizardry that the band is fully capable of, but doesn’t often show. “The Waste Land” is a tense beehive of chanted vocals and creepy guitar lines, and “Anonymous” features piano and guitar that explodes into a full-fledged song. “Return to Ithaka,” however sends the album out in style. Layer upon layer of huge chords and shred guitar close out the 13 track affair, ending with triumphant sweep picking runs.

The only real downside to the production of the album is that it’s almost TOO slick at times, with the vocals feeling a little separated from the music, and the music itself a little too locked to the beat. Personally, I would prefer more of a live, loose sound, but on an album this strong, it’s not much of a complaint.

Rivers Cuomo has never been the best lyricist, striking a fine balance between kitschy geek-dom and absolute stinkers as if it were his job. However, EWBAITE finds Rivers stepping up his game, creating running themes throughout the album which serve to make it a concept album of sorts. EWBAITE is broken into three thematic parts: one of which explores Rivers’ relation to his audience, a suite of classic “girl songs,” and a final one relating to his struggles and reconciliation with his absent father. Granted, there’s still a few clunkers scattered throughout, but that’s been a running theme in his writing dating all the way back to Blue, and at this point, it’s more of a sticker feature of the band than a surprise.

What’s most impressive about these themes is that they’re easily understood through the words themselves, and don’t require wading through interviews and fan analysis to decipher. It’s great to see this kind of honest, personal writing from Rivers again. We see him reach into his own inner struggles, instead of feeding off of cliches and tapping into teenage angst he hasn’t actually felt for decades.

Vocally, there’s not much to say. Rivers’ voice sounds about the same as it ever has, sans the accents he adopted on some later-era Weezer tracks. There’s more use of falsetto throughout the album, which does wonders to strengthen the melodies they’re used in, but otherwise you’d be hard-pressed to discern a meaningful change in his style.

Overall, this is easily the strongest record Weezer has released since “Maladroit,” and maybe even “Pinkerton.” It’s a triumphant return to form that celebrates and showcases the best parts of Weezer, ones that have long been mired in ill-advised attempts at experimentation. From the classic crunch of the guitars, Rivers diving back into writing more personal lyrics, and the finely focused songwriting, Everything Will Be Alright in the End makes a fine case for being the third classic Weezer album.

If you’ve hopped off of the Weezer-train for the past few years, it might be time to renew your boarding pass.

Key Tracks: I’ve Had it Up to Here, Go Away, Cleopatra, The Futurescope Trilogy