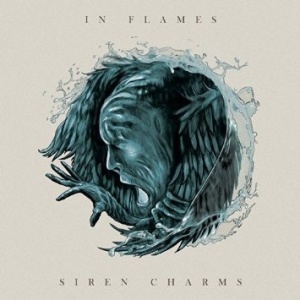 In 2011, I called Sounds of a Playground Fading a return to form for In Flames, which it indeed was. However, it was only to be temporary, as the band’s latest effort, Siren Charms, unfortunately shows.

In Flames has always been polarizing, frequently changing their sound and experimenting with new styles with pretty much every one of their albums. For better or for worse, this has provided the band with a lot more creative steam than many of their contemporaries, as well as sustained commercial success. Personally, their willingness to change and push their boundaries is what makes them one of my favorite bands, despite the legions of fans that still cry out for a sequel to The Jester Race.

However, Siren Charms may be the album that proves that the band is finally out of ideas. This album finds the band’s style largely intact from SOAPF, especially in the guitars department. There’s little deviation to Bjorn’s or Niclas’ riffs or leads, existing well within the bounds of the metalcore influenced comfort zone of their later output. Despite this, Anders has once again found a way to switch up his vocals, opting to sing on the majority of the songs here, with his scream being utilized in only few small doses. This would be fine if he sounded like there was some conviction behind his words, but the only moments of true emotional release come in those rare screamed sections.

Perhaps these choices could’ve worked. Anders has made singing an interesting part of In Flames songs before, and there’s something to be said for not fixing what isn’t broken as far as the music goes. But the biggest crime here, simply put, is the weakness of the songwriting. SOAPF had a handful of songs that suffered from being cut a little too closely from the same cloth, but on Siren Charms, that problem is systemic. Aside from Anders’ new singing style, there’s a general lack of new ideas, and it takes several listens for the songs to begin distinguishing themselves from one another. Nowhere is this more obvious than on “When the World Explodes”, where we find the band aping “Reflect the Storm” from Come Clarity by repeating the same male/female duet formula. In fact, even after several listens, only a very few riffs and melodies stick in my head. As a whole, this lack of ideas and dull songwriting leaves the album feeling toothless and uninspired, like an album made solely to fulfill a contract.

It would be a lie to say that, despite this albums many failings, there weren’t a few ideas that worked. The previously mentioned When the World Explodes slows down into a slow, atmospheric section where Emilia Feldt takes the lead vocal line, and Anders chants boomingly in the background. “Filtered Truth” sports an infectious chorus laced with synth, and powerful lead playing reminiscent of the band’s best work, and “Everything’s Gone” is probably the heaviest moment on the album, replete with a tightly-wound riff and fast double-kick work from Svensson (though the song is a little to close to sounding like a Come Clarity outtake). Strangely enough, one of the bonus tracks, “Become the Sky” is the most genuinely different song from the album, and is one of the strongest songs to come from the sessions – why it was left off of the album is anyone’s guess. One of the most memorable moments, however, is the melodic bass line that opens up the title track, supporting the track only with some help from the drums for the majority of the first verse. But in the end, these few moments simply aren’t enough, and too few and far in between to make for a good album. Siren Charms is flat and fails to push the band into any new territory, without even having the decency to deliver truly good songs within the mold that created it. It’s a disappointing release from one of metal’s most creative bands, but maybe at this point in their career, it’s the best we can hope for.